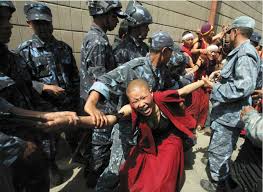 Here, I would like to share what the Chinese did to Tibetan people, the only people who possess secret knowledge of I’m looking for all my life.

If you are lazy watch this documentary instead.

My Land & My People by Dalai Lama

Chapter 5 – INVASION
The Chinese requisitioned houses, and bought or rented others; and beyond the Norbulingka, in the pleasant land beside the river which had always been the favorite place for summer picnics, they took possession of an enormous area for a camp. They demanded a loan of 2,000 tons of barley. This huge amount could not be met from the state granaries at that time because of heavy expenditure, and the government had to borrow from monasteries and private owners. Other kinds of food were also demanded, and the humble resources of the city began to be strained, and prices began to rise. And then another general and another eight to ten thousand men appeared. They seized a further area for camps, and under the burden of their extra demands for food our simple economy broke down.
…
Popular resentment can never be repressed for more than a short time by force, because forceful repression always makes it stronger. This lesson, which one would have thought so obvious, has yet to be leaned by the Chinese.

Chapter 13 – PRESENT AND FUTURE
Tens of thousands of our people have been killed, not only in military actions, but individually and deliberately. They have been killed, without trial, on suspicion of opposing communism, or of hoarding money, or simply because of their position, or for no reason at all. But mainly and fundamentally they have been killed because they would not renounce their religion. They have not only been shot, but beaten to death, crucified, burned alive, drowned, vivisected, starved, strangled, hanged, scalded, buried alive, disemboweled, and beheaded.
These killings have been done in public. The victims’ fellow villagers and friends and neighbors have been made to watch them, and eye witnesses described them to the Commission. Men and women have been slowly killed while their own families were forced to watch, and small children have even been forced to shoot their parents.

Lamas have been specially persecuted. The Chinese said they were unproductive and lived on the money of the people. The Chinese tried to humiliate them, especially the elderly and most respected, before they tortured them, by harnessing them to ploughs, riding them like horses, whipping and beating them, and other methods to evil to mention. And while they were slowly putting them to death, they taunted them with their religion, calling on them to perform miracles to save themselves from pain and death.
Apart from these public killings, great numbers of Tibetans have been imprisoned or rounded up and taken away to unknown destinations, great number have died from the brutalities and privations of forced labor, and many have committed suicide in despair and misery. When men have been driven to take to the mountains as guerrillas, the women and children left in their villages have been killed with machine guns.

Many thousands of children, from fifteen years of age down to babies still at the beast, have been taken away from their parents and never seen again, and parents who protested have been imprisoned or shot. The Chinese either declared that the parents could work better without their children, or that the children would be sent to China to be properly educated.
Many Tibetan men and woman believe the Chinese have sterilized them. They independently described a painful operation to the interrogators of the International Commission. The Commission did not accept their evidence as conclusive, because the operation did not correspond to any method of sterilization known to the medical profession in India. But on the other hand, there was no other explanation of it, and since the Commission’s report was completed, new evidence has been given which has convinced me that the Chinese did sterilize all the men and women of a few villages.

Besides these crimes against the people, the Chinese have destroyed hundreds of our monasteries, either by physically wrecking them, or by killing lamas and sending the monks to labor camps, ordering monks under pain of death to break their vows of celibacy, and using the empty monastic building and temples as army barracks and stables.
On all the evidence which they collected, the International Commission considered the Chinese guilty of “the gravest crime of which any person or nation can be accused” – that is, of genocide, “the intent to destroy, in whole or in part, a national, ethnical, racial or religious group as such.” They were satisfied that the Chinese intend to destroy the Buddhists of Tibet.
…
There had never been famine in Tibet, in all its recorded history, but there is famine now.
…

In these ways, with the help of many friends, life is being made tolerable for those who escaped with me. But, of course, the vast majority of Tibetans did not escape in time, and now they cannot escape. Behind the Himalayas, Tibet is like a gigantic prison camp.
…
I would dare to say that no people have suffered more since the Second World War; and their sufferings have not ended, they are continuing every day, and they will continue until the Chinese leave our country, or until Tibetans have ceased to exist as a race or as a religious community.
…
My hope rests in the courage of Tibetans, and the love of truth and justice which is still in the heart of the human race; and my faith is in the compassion of Lord Buddha.

My Land & My People by Dalai Lama

No comments to show.
Scroll to top